20 cookers (hanging on for dear life)

Any cookers who fall off

642m before new driver and side window is required

The B1 Zeus Main battle wank (a.k.a. Impound Force 1) is a first generation Cooker battle vehicle designed by cookers and built off a 1998 Freightliner FL80. It was heavily modified into a cookercab pickup (because a regular ute just isn't big enough to compensate for the owners.. shortcomings), with a lift-kit and the load tub off a Ford F350/450 dually pickup truck, painted matte black with large air horns and plastered with Tactical flags and cooker slogans in fluoro colours. Image: Built off a 1998 Freightliner FL80 (likely originally a fire truck), Zeus employs a number of standard field-approved modifications, such as twin "Look at me, I'm an idiot and I'm about to do something stupid" train horns, twin-overhead grease nipples, chrome plated foxtail on the antenna, a dash mounted flower vase and an up-cycled F-truck tub from a local buy-nothing group. 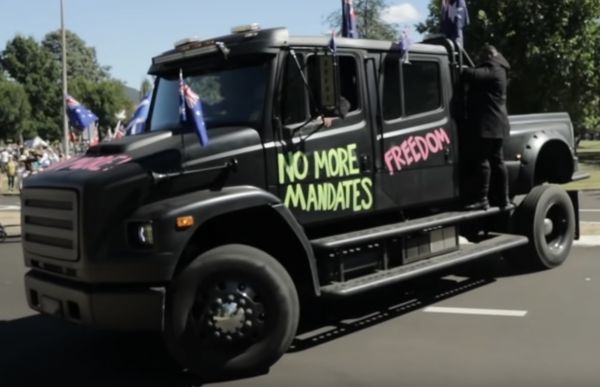 Image: Zeus on its way to assault police and deafen the neighbours. The driver of ZEUS-1 quickly experienced the "find out" phase of the "fuck around, find out" ethos.