Cookers consist of people who believe a wide range of conspiracy theories, whether mainstream or fringe.

Multiple definitions of the term Cooker can be found on Urban Dictionary, though none really capture the true nature of the Cooker as demonstrated during the Conn-voy to Kambra 2022.

In the Qanon community cult, the "gifted" people who takes Q's cryptic pronouncements (known to the cultists as breadcrumbs) then extrapolate and stretch them into semi-coherant ideas and conspiracies are lovingly known as Bakers. The cooker is a little lower on the social scale of far right nut jobs. The cooker doesn't really create any new conspiracies, the cooker contributes to the cause by merely believing every conspiracy they ever hear, no matter how far fetched or moronic the conspiracy might be.

We welcome further edits to this topic to expand the various aspects of this definition.

Most cookers appear to have been formerly employed in low- to middle-income careers, and of at least below-average intelligence and of limited education. There are several outliers, of people who are of average intelligence, though importantly, this list does not include:

The Dunning–Kruger effect is the cognitive bias whereby people with low ability at a task overestimate their ability. Some researchers also include in their definition the opposite effect for high performers: their tendency to underestimate their skills [1]. This phenomenon is universally shared with these cookers, especially those who have worked in health fields. Those who work in quack-associated "health" fields are even more susceptible to this, and it is suspected that this may be a universal feature in this demographic.

However, even "everyday mums and dads" these days are experts in virology, epidemiology, vaccine development, and developmental psychology, thanks to their use of Facebook. Most of their information has been distributed using the "share" function, and at least 30% of their misinformation comes in the forms of Minions memes. 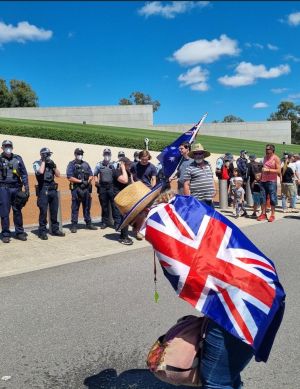 An overcooked cooker of the 14th Overcooker shock regiment commences their negotiations with members of the Parliamentary security detail during the February 12 "I went to this insurrection and all I got was this shitty flag cape" protests.

The February 12 "insurrection" has demonstrated that most cookers will live-stream their presence throughout the various social media networks which many cookers are protesting against. So much so that the larger live-streamers have had difficulty streaming the events themselves, which has in turn made laughing at the cookers from online quite difficult.

This use of the technology (which tracks their every movement and their online habits) is deeply entwined with their catch-cry "If it's not live-streamed, it didn't happen".

Interacting with the Cookers

Interestingly, unlike the the remainder of the population, who generally can conduct a civil debate, the vast majority of cookers have fixed thinking about all issues they feel strongly about. Even in the face of clear, concise and un-refutable evidence, they find the mere possibility of changing their mind about something abhorrent, and will quickly turn any discussion or debate into petty name-calling, or as recently demonstrated by the cooker 1andonlyree (who is currently in hospital, presumably from buthurt?), rhetoric and other nonsense.

It is recommended that, upon encountering a cooker, that one simply ignore them. This will not only deflate their Main Character Syndrome, but will also protect your brain from becoming cooked.

Unfortunately, it appears that becoming a cooker is a terminal condition. No research has been conducted to support any therapy or medications, though it is believed that getting vaccinated may help prevent worsening of the condition.

Complementary or alternative therapies have been shown to worsen the cooker.

Cookers like to gather in groups of 100,000 at a time and chant together. @OzraeliAvi (February 12, 2022). "Sack Them All" (Tweet) – via Twitter. These chants often last only a few recitals before another chant is started.

In one particularly ironic episode on 10 February 2022, when the cookers attempted to support The Youth Advocate's application for leave to appeal (which was dismissed as "frivolous and vexatious" by Justice Patrick Keane AC), they chanted two separate chants outside the High Court of Australia, after they had all slept in and missed their opportunity to yell at a building: