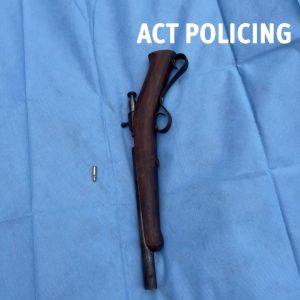 In late January, James organised a GoFundMe campaign under the pseudonym of IRONBARK THUNDERBOLT, in an attempt to grift fellow cookers out of petrol/meth money for his journey to Canberra. The cookers shared it far and wide, amassing around $160,000 in support, only for GoFundMe to freeze the account, and subsequently cancel it after his run in with the law.

Run ins with the law

James allegedly thought it'd be absolutely grand to bring along his pet, an unlicensed, sawn off rifle, along with 124 rounds of ammunition, to Canberra's parliamentary circle. Greer's unroadworthy vehicle was searched by Canberra police, where they discovered the illegal items and subsequently charged him with unauthorised possession of a prohibited firearm, and ammunition.

Following the release of Greer on bail, and in a stunning demonstration of solidarity, the combined forces of the cooker empire organised a solid 10 days of protest action, cookerdoofs, open mic nights, Cooker karaoke and baptisms on the immaculately maintained lawns of the Supreme Satanistic Temple of Pedophelia (AKA Australian Parliament House). However, as one of the conditions of bail was that Greer not enter the Parliamentary Triangle precint, he was not able to particpiate in any of the protest activites he travelled across Australia to lead. Eventually, after sitting in camp and thinking about what he'd done, Greer organised his own protest march to the Australian War Memorial to allow him to finally, actually, protest something. However, after the speeches ended, everyone realised the real action was happening at the stage at Parliament House, and headed off to party with the cool kids. everyone can go to my party but me
Retrieved from ‘https://cookerpedia.org/index.php?title=James_Greer&oldid=1642’
Category: