busting his buttons off

Former Cheerleader turned Victorian proud boy member Harrison McLean is the administrator of the Melbourne Freedom Rally groups. Along with Sarah Ashlee, Harrison stole the Convoy to Canberra pages and then got famously booted out of camp by Jim Greer.
Coincidently, the AFP raided the original camp the next morning where Jim Greer was found in possession of weapons and Ammunition.

Some other interesting facts about Harrison which he will deny publicly: 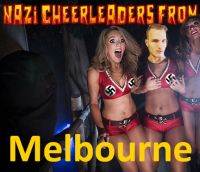 In public, “McLean has previously denied being involved in the far right. ‘I am not Far-Right. I am a Libertarian Populist, and I support Freedom of Speech,’ McLean posted under his pseudonym Dominic D, in one forum.”

But in private, he has engaged with the National Socialist Network, the neo-Nazi group who were recently exposed via a 60 Minutes investigation. McLean is happy to associate with these proud fascists.

Further, in his own words: “We have a LOT of very NORMIE people coming in from banners and [Facebook] groups that are not ready for the JQ (Jewish Question) yet, and may attack us as highly anti-semitic and stop promoting us all together to their friends and family,” he wrote.

“We start at ‘Dan Bad’ and go right through to ‘No Coercive Vaccines’ and get into the ‘Pedo suppression orders’ and NWO agenda and One World Government as a concept to be opposed,” McLean wrote, echoing a laundry list of anti-semitic conspiracy theories for which he is trying to find a fresh audience out of the pandemic.

Harrison's personal life consists of living his life entirely through Telegram, often not seen nor heard of for 12 hours or more until one of the trolls he likes to curate in his (now disbanded) troll zoo, otherwise known as his personal telegram group chat, happens to mention his name and he will pop up and randomly post some arbitrary response.

But other than that who are we kidding, Harrison does not have a life.

Rumours of double-agent shitfuckery have surrounded Haz pretty well much from the start of the pandemic, when he appeared in his fat controller Agent Smith cosplay with added megaphone prop. More to come