Camp EPIC, also known as Camp Cooker, EPIC, Cookerchella or Centrelink Summer Camp, was established in early February 2022 to house antivax refugees from all over Australia. Outside of its current occupation, Exhibition Park in Canberra’s camping facilities are set on 70 hectares of unique country surroundings only 8 minutes north of the city centre and offer full amenities including:

Exhibition Park in Canberra is home to many local and national events all year round including exhibitions, fairs and festivals.

EPIC was picked as the Cooker Chosen Land due to it's close proximity to Parliament House, Canberra's SBS Studio and the Lifeline Book Fair. In the early days of occupation, plans for the cookers to move into EPIC were almost foiled by a traffic controller with suspected links to the Illuminati and NWO blocking off the turning lane. It was later discovered that this was part of scheduled roadworks (ordered by the Illuminati NWO Agenda 21).

The EPIC greeting party is comprised of six bogans, a girl on roller skates and a pig. All of whom clap and cheer as cars enter the settlement.

The Battle of EPIC, also known as the Cooker Offensive, is an ongoing conflict in the battlefields of EPIC Campground in Canberra, Australia; between Admiral 'Captain Hoody' Hood , and General Riccardo 'Il Douche' Bosi. The struggle is primarily centered on whether Camp EPIC should execute politicians, or baptise them.

Hungover and tuckered out from their antics the previous day, and threatened with eviction by the World Bank, the Cookers began a mass exodus from EPIC on 13 February 2022.

Some intrepid Cookers, likely high on meth or something sourced from local supplier Dave 'Guru', decided it would prudent if they blockaded the EPIC gates and not let anyone leave. So proud were they of their plan, they threatened anyone listening in with physical violence.

General (ret) Riccardo Bosilini attempted to lead the exodus to a new campsite at the promised land of Caloola, but a UN roadblock was already waiting for them. 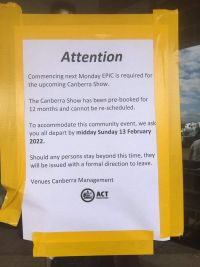 Eviction notice from the World Bank. This strapping young lad certainly didn't enjoy his super secret meeting being filmed and threatened the cameraman with physical violence. His estimated height is 5'4" and allegedly, we stress only allegedly, has a micropenis.

After being evicted and attempting to bullshit their way into Caloola Farm multiple times only to be drustrated by police roadblocks, cookers attempted to settle at other campgrounds like Commonwealth Park and Cotter Campgrounds.

At time of writing, the current leader/s of EPIC are unclear, as they change on a daily basis. Whoever holds the microphone during their nightly meeting is able to command the residents, or read bad poetry. The nightly meeting has been affectionately referred to as 'Open Mic Night'. However, it is mandatory for the speaker to claim to not be the leader, despite clearly telling people what to do. Captain Dementia popularised this during his time leading the cookers, but most of the Hall of Fame have employed this as well.

Due to the absolutely unhinged nature of a Cooker, the camp was forced to make some rules around basic human decency:

EPIC is rife with crime with reports of syringes being found in public toilets, stolen trailers and exposed rib cages being frequent.

Although not illegal, it is thought that many unvaxxed sperms were deposited into the pure blood freedom fighters using traditional methods on a nightly basis. Thus ensuring the legacy of these idiots will continue, at least for another generation.

Due to their sense of entitlement and general lawlessness, the Cookers forced the local Lifeline book fair, gladly celebrating its 50th anniversary, to have to close.

It is unsure when they resorted too base methods to fund this ongoing conflict. Some sources indicate fairly early on in their occupation of EPIC citing 'in the epic economy $20 dollars is literally a million dollars'. First out break of CRD's (convoy related diseases) were spotted easily on journalist faces.