The Mission2Melbourne was a protest event engineered and run by Tami Jane (aka Shithat) which commenced on October 7, 2022. Supposed to take place over 5 days, people from all over the world were encouraged to flood the streets of Melbourne through physical attendance and marches around various sites, in order to renounce the broad COVID-19 restrictions imposed by the Governments, which were actually ending on Oct 12, 2022 anyway.

Intending to draw attention to some of supposed concerns such as government corruption, main stream media lies, vaccine related injuries and food security, the event ultimately collapsed into a drug and alcohol fueled disaster where several cooker factions created significant drama that severally tarnished the reputation of the event and its organizer, Tami Jane.

Mission2Melbourne planning had been underway for 'months', and drew approximately 300 extra cookers to the city of Melbourne. Some attendees formed vehicle 'Convoys' in the days prior to travel to Melbourne from interstate. To coordinate the convoy en route, the mobile communications app Zello was used and channel 'm2mel' was created, allowing freedum fighters to freely communicate using their mobile phones whilst driving.

Several cookers stopped to camp at the Albury Show Society (ASS) grounds on the October 6th prior to entering Melbourne proper. During their time in Melbourne, cookers would march in a disorganised fashion between a couple of different locations:

The Lap Of Love Cooker vehicles were to gather together at Kalkallo Hungry Jacks to form a convoy to perform a lap of Melbourne, designed to "Heal the ring of steel" and bring closure to many who were still traumatised by COVID-19 related lock downs. The final destination was the Aircraft Viewing Area on Oaklands Road. Initially, bad weather threatened the convoy and participants gathered at the local pub for drinks before eventually setting off.

The convoy departed the pub at 12:55pm, one hour later than intended. Initially the convoy was very slow moving, though once underway it became incredibly confusing for the participants as trolls infiltrated their communications channels and wreaked havoc. One troll impersonated Tami Jane and provided erroneous instructions to the convoy, while the moderator was nowhere to be found. Other trolls soon joined in with confusing comments, directions and questions. It was a complete, hilarious, disaster. 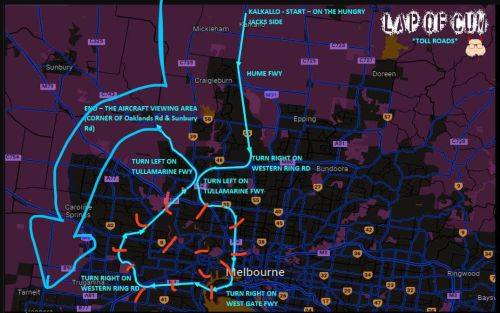 In honour of those freedum fighters who were brutally shot by police, and those who took their own lives, a twilight vigil was held was held. Tami Jane had requested everyone attending to wear white, for a 'very special thing' she wanted to do for everyone, though that did not appear to eventuate. 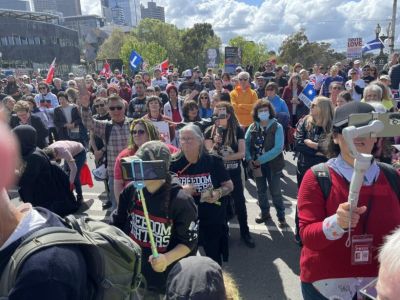 
Cookers appropriated the Free Assange protest to make their numbers seem greater, and subsequently joined in to form a human centipede.

The intention of the Free Assange protesters was to form a human chain around Flinders Street Station, covering both the Yarra foot bridge, and reconnecting on Princes Bridge. However, even with the aptly named Bridge Walker there and despite blocking Swanson Street, the numbers were to small and a circle could not be realised.

A protester wearing a "Free Assange" shirt reportedly stormed off after being abused by cookers for wearing a face mask, whom he told to "Fuck off".

Plenty of marching took place, back and forth.

Chants were of such a low quality, they were soon ridiculed by the locals.

Some Doctors whinged about stuff, it was very boring. In an amazing show of Dutch Farmer Courage, two tractors showed up, at a quoted cost of $3000 for logistics to perform the appearance. As they were not suitable for road use, they remained restrained on the trays of tow trucks.

Donations were solicited by the organizers to help pay for the huge cost of bringing two tractors into Melbourne.

At an early 8:00am start, many cookers were complaining of sore feat, exhaustion and general tiredness, having completed 4 days of marching already. The energy was quite low.

Canberra Cookers applied stickers to the Channel 7 building, which Sheedy spent a long time ranting whilst removing them in a video (link needed).